Do typographers and type designers have an unfair advantage when reading eye charts? While sitting at my optometrist’s office last week, I wondered if my years spent researching and using letterforms gave me some sort of visual acuity performance edge.

Me: (Sigh) Well, I know the second letter is a P. But I’m not sure if I’m actually reading the P or if it’s just because I know it’s a P by the heavier typographic color of the bowl in the top right area of the letter.

Optometrist: Would you say the line is clearer in view 1 or view 2?

Me: I mean… I can’t say that the line is actually clearer but I guess the letterforms in #2 are slightly less sparkly than in #1.

Optometrist: You know, it’s very difficult to get an accurate eye reading on you.

Modern visual acuity tests are based on the 1862 Snellen Chart by Dutch ophthamologist Herman Snellen. Instead of using existing typefaces, Snellen created optotypes, standard symbols which include letterforms, numbers and symbols designed on a 5×5 grid specifically for measuring vision clarity.

By Jeff Dahl [CC-BY-SA-3.0 or GFDL], via Wikimedia Commons

Back at my optometrist’s office, I was laboring over the LogMAR chart (Logarithm of the Minimum Angle of Resolution), which, unlike the Snellen model, consists of five characters per line and standardizes the size progression and spacing of each optotype from one line to the next. 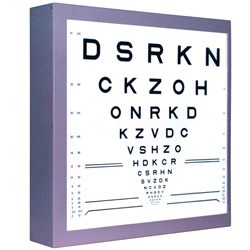 By Crosstemplejay (Own work) [CC-BY-SA-3.0], via Wikimedia Commons

LogMAR charts use Sloan optotypes, designed in 1959 by Dr. Louise Sloan, now the standard for vision acuity tests in the United States. In contrast to the drastic slabs in the Snellen chart, Sloan optotypes are blocky but endearing sans with awkward terminals, designed, I’m presuming, to stump you on those pesky lower lines. And in case you possess a burning desire to acquire the Sloan font for your own non-commercial use, fear not: Dr. Denis Pelli of NYU has created a digital version of the Sloan typeface, adding many characters not previously included in the original drawings.

Any other type-folk have a similar experience at the eye doctor? Can you remove your “typographic lenses” (pun intended!) while reading an eye chart? Does your eye doctor find you as irritating as mine?

This post was originally published on a long, lost Typophile blog, but has been recently rescued from the deepest depths of the Internet Archive.
posted in Commentary

1 Comment → A Type Nerd Walks Into The Eye Doctor’s…